I’m joining Owlhaven and a group of other great bloggers to tell my love story for October. For more stories check out the comments under each of Owlhaven’s installments.

I drove away from my girlfriend B’s house with the little note tucked away in my bag. He had sent it down in a letter to her.

The note hadn’t really said anything but ‘hi’ yet I couldn’t stop thinking about it. Already, I was forming in my mind what I would write in return, maybe send him a photo? A poem? There would be plenty of time to think about it while mucking out the stalls this evening. He certainly had to be cuter than the self portrait he had drawn, right?.

Not one to hold back on expression, I wrote him a long letter rambling on about myself and my teenage viewpoints. I also sent him a photo my father had taken of me on the front porch. 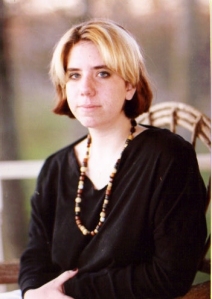 He sent me a photo as well.

He wrote back to me with humor and passion. Suddenly a bright new love sparked between us-fast, intense and undeniable. The fact that he lived far to the north and I lived in the deep south didn’t matter.

Excerpts from Wildwood Papa’s letters to me:

“I love you and my love for you is as deep as the infinite void of space. I can’t wait to talk to you again today. The sound of your voice…I don’t know, it’s just so wonderful. I love to hear you talk. Somehow it makes me feel secure. Your words wrap around me like a thick downy comforter.”

“I just got off the phone with you again. Remember that tarot card reading I mentioned on the red paper? One part has already come true, I’ve found the woman of my dreams and it’s you.”

This red paper held the details of a tarot card reading that he had gotten from a friend. The cards said that he would travel soon and this would be good because he would leave some problems behind and would grow spiritually. They also said that he would find the woman of his dreams and his true love.
We talked on the phone until the wee hours of the morning. We chronicled our lives in love letters to each other and we counted down the days until his summer visit. Then finally that day came. He rode the Greyhound bus down to see me and my best friend K drove me to the city to meet him.

Excerpt from my journal:

“I was talking to a guy at the bus station when K tried to tell me he was there. I wasn’t listening to him until finally I looked and there he was walking toward us. Tall and lanky, camo pants tucked into combat books and his Alternative Tentacles t-shirt. He kneeled down in front of me. My mind went blank-total concentration of him. I think we held hands and I was so still, like I was in pause motion. Then he kissed me. We kissed.”

We were each others’ firsts and as I later wrote in a letter to him, I was so glad it was him. We spent long lazy days together, getting to know each other and hanging out with friends. What was going to be a week long visit turned into two short weeks and it felt like we had known each other forever.

Excerpt from my journal:
“He was so beautiful in those cut off jeans and doo-rag. He sat on the picnic table sketching K and B. Eventually I came to him and sat on the table behind him, resting on his back. The sun had laid its heat upon his golden skin and he was warming to my cheek. I was cold until I drew close to him. I still remember the wonderful contentment I felt.”

Then he had to go home and it broke my heart. It hurt so bad I thought I might die from it. It felt as though pieces of my soul were exposed and hanging loose, love disemboweled.

Excerpt from a letter to him:
“My webs are trailing behind me, catching on the grass, on the pavement. Wrapping around my feet, silken saliva pooling in my footprints.”

We couldn’t seem to cross that bridge of distance that was between us this time. We called and the other wasn’t there to pick up the phone. We wrote letters that went unanswered for weeks. The pain of being separated couldn’t be healed by expensive phone bills or a book of stamps.

Excerpt from a letter to him:
“I feel very far from you right now. I have dreamt about you many, many times and they are all vague, leaving me with a faint feeling-the dream state of you, which is somehow different than you. Nothing more. I get this strange and irrational feeling that I’m forbidden to call you because it seems that when I do you’re not there or we can’t talk long anyhow. I don’t know. I’m a little scared because I have so much trouble finding the right words to talk to you now. We didn’t have this problem before. It would be better if I could see you, touch you, listen to your voice. “ 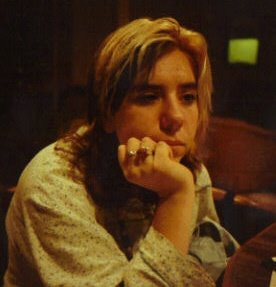 Excerpt from a letter to me:
“There’s no one here who loves me like you. Sometimes I just get [mad] at everyone, even you sometimes, for not being here. Then I get [mad] at myself for being so unreasonable.”

We were young, we had our lives to live. And so we broke each other’s hearts and we broke our own hearts. We made bad choices. We moved on. We changed.

I began dating a boy that would change my life for good and bad, who I would stay with through betrayals and abuse. Our lives together were tumultuous, passionate, pathetic. The tornado of insecurity that raged inside of me whirled out, uncontrolled and fierce to drive those who loved me away. Wildwood Papa, even as far from me as he was, could see that something was wrong.

Excerpt from WP’s letter to me:
“I had a dream last night. I can remember walking around by myself through huge throngs of people and my friends didn’t notice me. Then I looked and saw you standing almost right next to me. You glanced up and there was no reaction-maybe you didn’t recognize me. I just kept walking then finally I found B and she took me to your house. You were there with [your boyfriend], but you came up and gave me a big hug. I felt uncomfortable around him and he felt uncomfortable around me. This sucks. I’m going to go now.”

Another excerpt:
“I feel like I hardly know you anymore and you probably feel the same. I am fine except for when I talk, write to or think about you then part of me goes to pieces. Then I feel quite lonely and forlorn, at other times upset and ashamedly jealous. I do still love you and don’t want to lose you to time and distance, but what we had…it’ll just never be the same as that. If we ever come together again it’ll be like starting over. It’ll be a fresh new story.”

I helped B move back north and it was one of the most gut wrenching things I’d ever had to do.

There they both were, living far away to the north, far away from me.

This site uses Akismet to reduce spam. Learn how your comment data is processed.